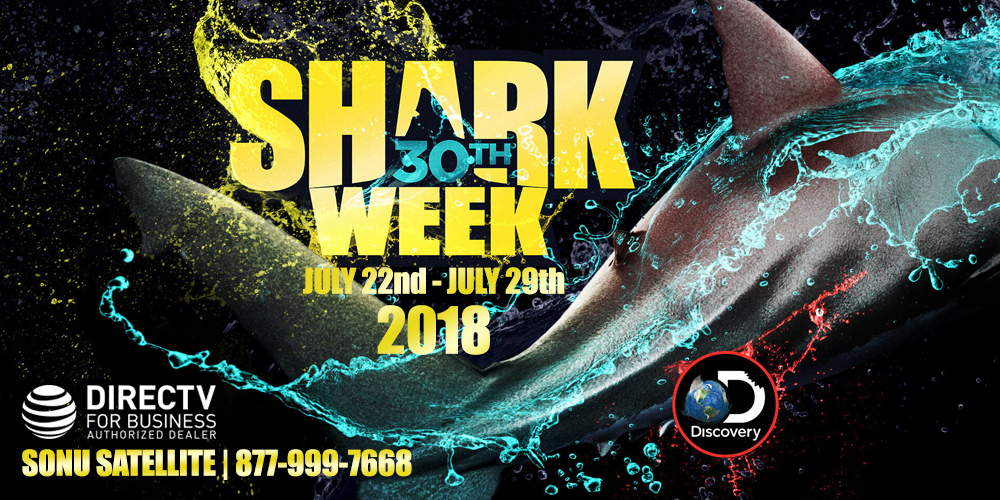 Posted at 16:07h in DIRECTV for Business by Hiten Doshi
0 Likes
Share

Shark Week has returned to make its highly-anticipated splash for Summer 2018, but this year has some extra bite to it. 2018 marks the 30th Anniversary of Shark Week on the Discovery Channel! It’s hard to believe that we’ve been glued to the TV for epic Great White shark research and documentaries for 3 decades. Although, we certainly haven’t lost any interest in the magic of all things Shark Week. 2018 promises a massive roll-out for the longest running summer television special event, including exotic destinations, massive shark stories, and a giant list of celebrity appearances.

Shark Week debuted way back in July of 1988, originated by Mr. Tom Golden as more of a conservation effort. The programming event quickly took off, and is now aired internationally across 72 countries. It has grown to include much more than just oceanic documentaries and shark themed movies. Shark Week has featured 3D viewing experiences, and even a video game that utilizes the GPS tags attached to live sharks. The Shark Week experience has grown so big, it is available to enjoy via On Demand, Social Media, Mobile Apps, and Online Content.

Shark Week 2018 is being hosted by none other than Shaquille O’Neil. The best part of having a full week of Sharks with Shaq, is the loveable giant has a massive fear of sharks! Watch the “Man of Steel” undergo personal training with Ex-Navy/Marine comedian Rob Riggle in order to overcome his fear. Shaq will eventually have to take on the full first-person Shark Week experience, and plunge into the depths with the majestic beasts up close.

Shaquille O’Neal is joined by a long list of other participating celebrities from all over the spectrum. Ronda Rousey will also be taking on special training for a completely un-caged dive with the menacing Mako shark, and Bear Grylls takes the plunge to prove his worth in the underwater environment. Aaron Rogers, Lindsey Vonn, and Robert Gronkowski team up for “Monster Tag”, an in-depth look at researching shark populations and conservation of our ocean’s predators. Even Guy Fieri and his son Hunter are joining us in the Shark Week festivities! Catch the duo in “Guy Fieri’s Feeding Frenzy”, and follow them on their journey through the Bahamas to see all the amazing fish their shark population love most.

The Shark Week 30th Anniversary started Sunday, July 22nd, and will run through Sunday, July 29th on the Discovery Channel. Tune-in at your place of business, and enjoy summer 2018 to the fullest. Contact Sonu Satellite to have DIRECTV installed at your properties, and make sure to ask for the Discovery Channel within your entertainment package. We have exclusive promotions available for you to save on television programming, so you never miss a Shark Week again!